In our modern age there are super-weapons, like the nuclear bomb, that can kill a person (or thousands of them) instantly. They are the weapons designed to eliminate human beings from existence with a cold and calculating efficiency. They are not the weapons of TUF E NUF's Weapons Wednesday. Our purpose is not to merely wipe a man or woman off the face of the earth. No, our aim is to cause as much pain and suffering as possible before the detachment of soul from body.

But not to be too severe we'll settle for minor injuries or annoyances too.

PUBICHARITOOTHBRUSH. I don't know whats worse, the roommate who deserves the psychological pain of pubes on their toothbrush, or the person who puts pubes on a toothbrush. Since John is the one who drew this, and thought about drawing it long before he even got to the bar, I'm going with the latter. 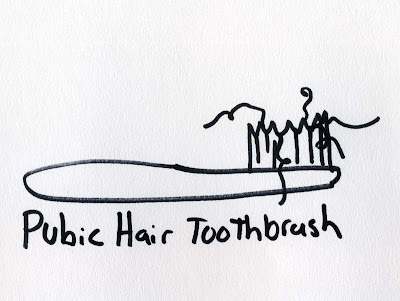 POOPSTICK. Mother nature supplies some of the best weapons around. Put some poo on a stick and viola, no one is going to fuck with you. You alone now do the fucking with. I don't care if you are Rambo with a laser cannon, no one wins in a fight against a poo stick. Even if you kill the person wielding this heinous device there is still a chance you might get poo on you and that's a chance no man is willing to take. Unless you're into that kind of thing...weapon is useless in Germany I guess. 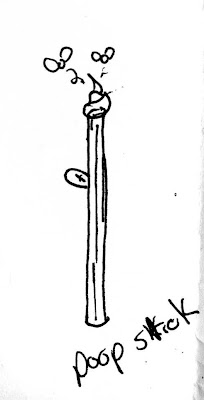 ELECTORAPEWHISTLEMACECLOUD. The ultimate in rape defense. Combining all three classic rape defense tools, this weapon let's the ladies dress however they want, wherever they want, and "ask for it" all they want. One blow of this whistle and the electric stream of the tazer is blown into a cloud of mace, causing the noxious mist to become shockingly effective. 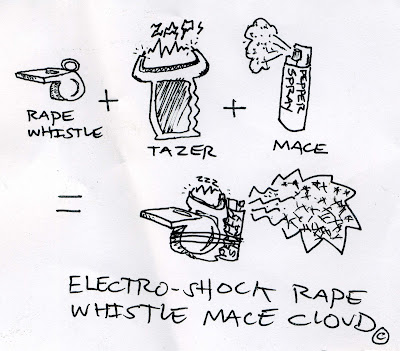