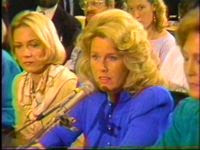 No one like being reminded of things they can't do or have. So it's no surprise that #4 on her Top 10 list is W.A.S.P.'s ballad about tender love making, Animal (Fuck Like A Beast). After having invented the internet, Al would spend countless hours alone in the computer room waxing solid to pics of Japanese people doing things to each other that Tip had once described as, "A negligent waste of good milk". One to always let her jealousy guide her, every time Al would throw his W.A.S.P. mixtape into the Ford Taurus Tips would resent Black Lawless singing about what she secretly wanted Al to do to her. Most of the time he would just lay on top of her and achieve orgasm without actually moving. Blackie represented to reckless abandon she desired in the bedroom. He also represented the kind of person she identified with being a white anglo-saxon protestant, which is of course what the band's name stands for.