The road trip is an American tradition. Friends and family taking to the open roads of our beautiful country to experience the fabric of America firsthand, bond with their fellow countrymen, and seek self-discovery in the mirror that is Americana. Well, just like Jack Kerouac, that dream is dead. Now the once majestic highways of our nation are littered with meth-fueled truckers, teenage prostitutes, murderers, and "burners". This week Weapons Wednesday takes a closer look at the once great American activity that celebrated freedom but has now devolved into a nightmare voyage through the wasteland that is the United States of America.


BUMDARTHOBOSMOKE. Anytime you pick up a hobo hitchhiker they immediately ask one of two questions, "Can I see your dick?" or "Can I get a smoke?". Sometimes you spend so much time on the road alone your decision making takes a bad turn and you pick up a tramp because you think it might be one of those friendly Steinbeck novel type scamps that will smell like a campfire and play the harmonica or have some weed at the very least and hey, he just wants to see it, right? But soon enough the reality of your actions takes form and you feel the weight of hitchhiker remorse. A remorse easily remedied with the Bum-Dart Hobo Smoke! Their first drag will be their last as a tiny, concealed poison dart will shoot from the filter into the back of their throat thus ending their miserable existence after which you can just simply push their dirty corpse right out of the passenger seat.

CHILDREN. Nothing kills the fun of a road trip faster than a child. Little backseat goblins that cry, complain, smell, and kick your seat. The worst part is, you can't hit them, you can think about it all you want but you can't actually wrap your hands around their chubby little necks and demand satisfaction. This invisible force-field of modern social boundaries protects children from getting what Dad used to be able to do while still keeping one hand on the wheel. Now the term "I'll give you something to cry about" doesn't mean they'll get the lashing they deserve, it means you're going to pop in the DVD of Homeward Bound in their personal backseat DVD player and listen to them sniffle into their cheetos about a cat that can't swim. 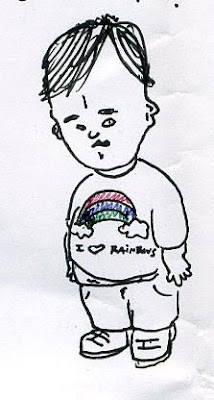 TRUCKSTOPHOTDOG. It might not kill you that day, or that month, or even that year...but it will kill you. It will sit in your stomach like a meaty cancer while other foods are digested around it. A deadly combination of indiscernible animal parts, bad science, and even worse karma, the truck stop hot dog is strictly for people that hate themselves. A popular food for post-rest stop encounters that begin with a toe-tap in a bathroom stall and end with some guy in an Animal Control uniform pulling his polyester slacks up from around his ankles while you fumble for your shirt. 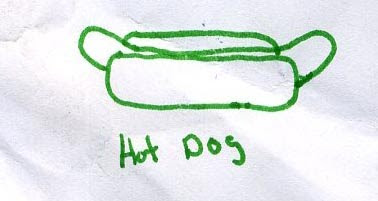 Welcome back Loren. Glad you made it safely through the wasteland.
Posted by TUF E NUF at 8:00 AM