SCIMIGUITAR. The curved Arabian blade gets a metal twist in this instrument of death. There's gonna be more blood onstage than a GWAR show. Only this time the blood is real...and it's yours. Guitar solo becomes guitar suicide, but honestly, what's more metal than that? 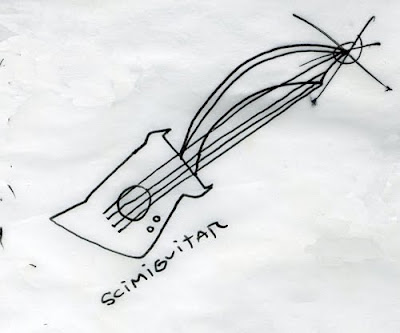 SANDFILLEDMORNINGSTARCOMPACT. Dara takes a feminine approach to Weapons Wednesday. I use the traditional definition of feminine which I believe is "Malicious, irrational, spiteful, and violent". I would double check that but I don't own a dictionary or care about being correct. This compact will not only scratch the shit out of your eyes with sand it will also just plain kill you with it's morning star attachment. Your face will be all made-up in the colors black, blue, and red. Just like Tammy Faye's corpse. 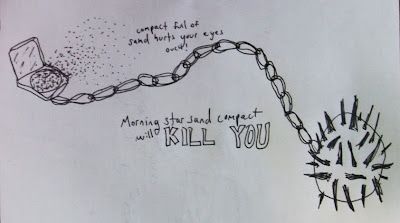 BACK-MOUNTEDCATAPULT. With the aid of a few pints, Matt came up with an updated catapult that you load with a vicious live ammo, The sinister cross-breed Rabid Bob-Cat Porqu-Skunk. Bred with the darkest of intentions, this animal covers all the bases of fucking you over. Upon contact the porcupine part sticks to you, the bob-cat part scratches the shit out of you in a rabies induced frenzy, and the skunk part puts the nail in the coffin as no medics will even come close to you and leave you to die. 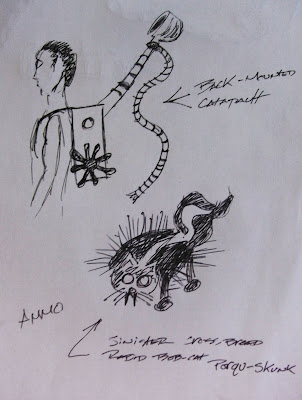 The GLASSCOZY. Sporting events often erupt in violence. Whether caused by you or someone else no one wants to get stuck with one of those new plastic beer bottles. They suck for fighting. This beer cozy made of glass makes sure you get your point across the way any good sports fan does, with violence. 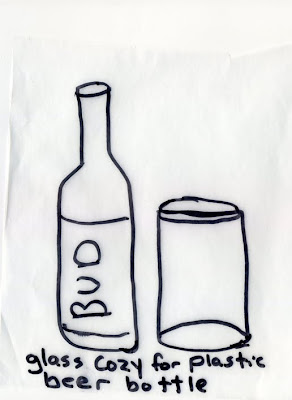 DOUBLED-BOMB. Legend has it that Garo's neighbor has had three husbands die on her. She also has enormous breasts. It's safe to assume they had something to do with it. Taking inspiration from this black widow the bomb has no gun powder as it simply drops from the sky and causes heart attacks in men (and lesbians). 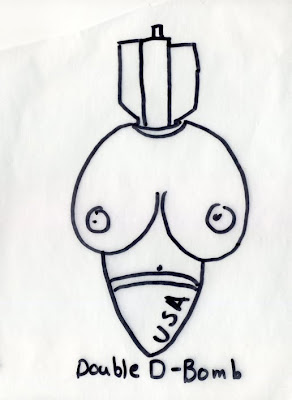