The modern age has brought us many architectural marvels that to this day draw millions to witness the sheer genius that the combination of mathematics, steel and human spirit created. Places such as The Eiffel tower, the Gateway Arch, The Taj Mahal, The Golden Gate Bridge, hell, even Tiffany Towers have served as evidence that we as a species have come a long fucking way from picking bugs from each others back hair as a snack and using feces as a projectile.

With the rise and mainstream popularity of skateboarding and bmx riding, modern architects use their skills to create specified areas for so called "extreme" athletes to hone their talents. There are skateboard parks in almost every city in the world, some of which are internationally renowned and are all built simply of concrete and wood. In Alameda county there are at least 6 such parks. The Bradical banks, constructed by a native Georgian named Wesley Bradley Bolton, is not one of them.

The Bradical Banks are located exactly 2 blocks from my home in North Oakland. The architect, who prefers to go by Brad or Beastman, has neither formal or informal training in skatepark construction. He has never worked with concrete, has never looked up diagrams or instructions in any book or online and futhermore has never even successfully created a birdhouse, let alone a skatepark. As a matter of fact, Brad did not own or know how to use a cell phone until 12 months ago, yet I digress.

One sunny Oakland afternoon Brad decided to take 5 bags of concrete, some water and a poorly constructed wooden ramp underneath the eastbound 580 bridge near a location that we like to affectionately call "Rape Alley". He placed the ramp against one of the supporting pillars of the bridge and proceeded to pour the concrete over the ramp until all 5 bags of concrete were gone. 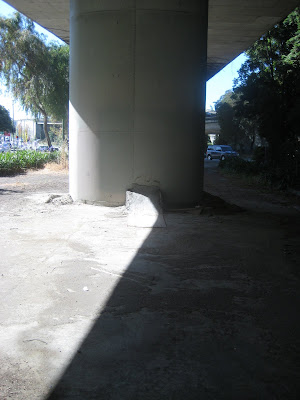 The result was a 1 1/2 high by 1 1/2 wide incline which, as far as I can tell, has only been used as a brace for vagrants to hold onto when defecating under the bridge. 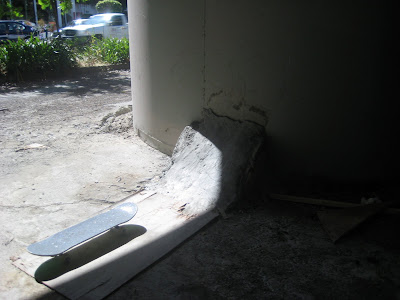 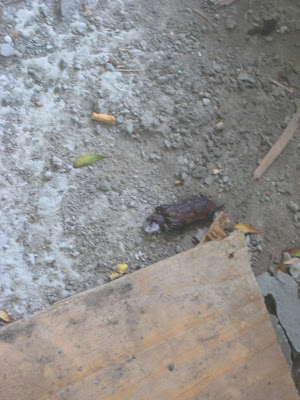 Not only is Brad's creation nearly impossible to skate based on it's construction, but also because of it's location. There are 2 pillars that he could have chosen to build something against. One of them has a clear 20 foot runway that is completely unobstructed 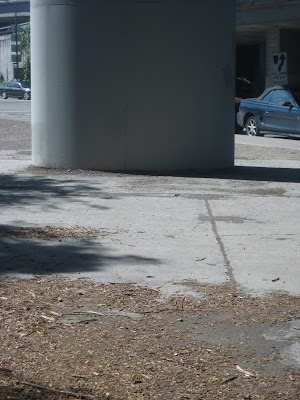 and the other has a runway that 2 inches deep with pigeon feces, dirt, and dried foliage.

Guess which one our Georgia peach decided use?

According to Brad, this is a skate spot for real men. So, if any of you real men out there have the balls to skate the absolute worst piece of garbage that I have ever laid eyes on, please be my guest. A lot of love went into the Bradical Banks, just not a lot of brains.